This page is in need of updating, so I apologize for any dead links. I hope to get to it soon.

John Gunther is an extremely talented multi-instrumentalist and composer. We were apartment mates in college, and John was my best man when I was married. Over the years John has done some outstanding work on a variety of projects for me, and a few of cues featuring John are on my demo page. He is continually involved in some of the most diverse musical projects of any musician that I know, and there are a number of CDs available of John's work with his bands Axis Mundi, Spooky Actions, and String Theory, as well as his own solo projects. John's website, turnworld.com, also has links to a number of outstanding artists that John is associated with.

Richard Thompson, originally from Scotland, had a very successful classical piano and teaching career when in his late twenties he decided that his interest in jazz composition and performance was the thing to pursue. So he left the relative safety of his career and moved to the United States to attend Berklee, which is where John Gunther, Richard, and I first met him in our very first class at Berklee in 1987: Alex Ulanovsky's challenging Harmony V course. Richard impressed us mightily with his musical ability and scared us all to death with his perfect pitch and musical memory - when Prof. Ulanovsky would play something way over our heads he would wait until class was finished, then go to the piano and repeat the exact voicing(s) and murmur: "Hmm, interesting." Richard is currently an assistant professor of music at San Diego State University's School of Music and Dance. 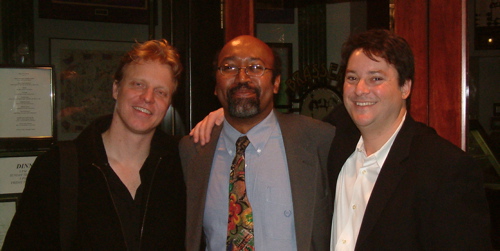 John and Richard have managed to continue to work together quite a bit over the years, because they both lived in the New York area until recently, when Richard and family moved to California. In February 2004, John, Richard, and I all managed to get together and play a few gigs in Portland, Oregon. This was the first time that the three of us played together in many years (possibly since about 1989). John and Richard perform and lecture as a duet, playing a mix of classical and jazz music (often basing improvisations on classical repertoire, original material, or music which has typically not been used in a jazz context), and they had performed and lectured at Portland State University while we were there.

Michael Koppelman, another member of the Berklee gang, is another amazingly talented musician, songwriter, and producer. His band Raintribe is worth a listen. Mike is a co-founder of Minneapolis based Bitstream Underground, a cutting edge internet services and interactive media development located in Minneapolis. Oh yeah, Mike is also an astronomer and astrophysicist, and with the dark skies of Minnesota he has become pretty good at astrophotography.

Chris Deering is one of my oldest friends - we've known one another since we were in Memorial Junior High School together (and believe it or not there is a web page - now it's called Memorial Middle School). After losing touch for about a decade after we graduated from South Portland High School, we crossed paths again in 1990 when I moved to Los Angeles, where Chris was already a student in the School of Cinema-Television at USC. Chris is a very talented screenwriter, with a unique point of view and sense of humor. His screenplays always make me laugh out loud, just as he used to make me laugh in seventh grade geography, or spit up milk through my nose during lunch (hey, it was the seventh grade...). I was pleased to compose the score for Chris's recent screenplay, In the Company of Agents. (One track on my demo page.)

JonMarc Edwards is an artist that I have become good friends with since moving to Los Angeles. His work is really fun and interesting, and there is no one doing anything like it. My wife and I are very proud to have a couple of his works in our small but growing collection.

Don Nelson is a very close friend that I worked with for three years at the Mt. Washington Hotel in the White Mountains of New Hampshire. Playing Don's charts there taught me a lot about arranging, especially for small group, and Don is one of the best trombonists that I have ever worked with (or heard, for that matter). Don has a few of my arrangements from the Mt. Washington days in his rather extensive book of charts, and information about his catalog is available at his web site.

The New York Voices is among the best jazz vocal groups in the world. Two of the founders of the group, Darmon Meader and Peter Eldridge, both worked at the Mt. Washington Hotel a few years before I did. I had met and worked with Darmon several times when I still lived in Maine, where he is also from, but I only met Peter when NYV came to visit the Mt. Washington, and we became fast friends. Their records are great, but they are particularly amazing to hear live. The Voices newest record is Sing, Sing, Sing.

Peter has two wonderful new recordings as a solo artist. To me the test of a good jazz record is whether it bears repeated listening (or even better, requires repeated listening), and both of these records stand up to that test easily. Fool No More is an album of original songs, sort of pop oriented, but very original stylistically. Stranger In Town is an album of standards and one original, and the songs and arrangements are perfectly suited to Peter's voice and style. Stranger... is a really strong jazz record, with especially outstanding performances by Peter, pianist Andy Ezrin, and saxophone virtuoso Michael Brecker.